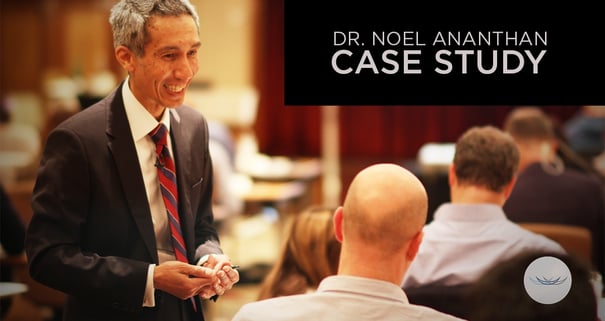 Patient's Chief Complaint: A straighter smile, but without IPR

Jane is a 28 year old whose chief complaint was that she wanted a straighter smile. The key elements in the initial assessment were the impacted UL canine and the UL lateral incisor in cross-bite. Because we had determined through an oral surgery consultation that the canine was favorably situated for exposure and alignment, the treatment plan appeared to be a textbook Six Month Smiles approach: space creation and alignment through IPR and rounding with the addition of bringing the canine down. 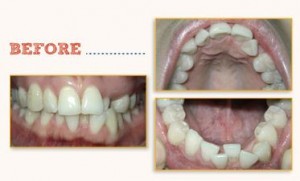 However during the consultation/work-up process, Jane decided that she wanted absolutely no IPR performed as a part of her treatment. Despite my best efforts to educate her (putting on my best 'co-discovery' face) that it was safe and extremely conservative, Jane remained adamant that we carry out treatment without IPR. Even after I told her that the only alternative was an extraction in each arch, she still did not want IPR to be performed.

I chose a staged approach to deal with this case. The first stage was overall alignment and space closure, which took about 3 months. This consisted of:

This first stage allowed me to stabilize the arches, and most importantly the teeth adjacent to the impacted canine, with long ties for anchorage before moving on to stage two which was exposing and engaging the UL canine. Stage 2 involved engaging the arch wire, powerchain and interarch elastics to guide and help movement. Anchorage is a key fundamental concept in orthodontics and learning to both respect and use it makes treatment much more efficient. 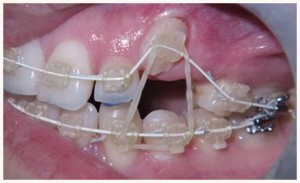 Because of the pre-treatment rotations in Jane's right anterior area, a further potential problem that we faced (and had warned the patient of) was the shifting of the upper midline as alignment progressed. Unfortunately, there was no easy solution for this so we did see the midline shift slightly to the left, although Jane was perfectly happy with the end result. I addressed a small black triangle between the LL central and LR lateral incisors which remained from the space closure (and also a potential problem with 'crossed' upper incisors) through simple bonding. Jane was ecstatic with her new smile. She now feels that it better represents how not only she sees herself, but also how she would like others to see her.

I hope that this case has illustrated that Six Month Smiles uses sound orthodontic principles to achieve great results, even with complications such as impacted teeth. In hindsight, if I could change anything with this case, I would have taken greater care to manage the presentation of information to Jane to have made IPR acceptable to her. But that is my dentists' bias coming through. We always have to respect that there is a real person attached to the teeth that we treat which makes the Chief Complaint nature of Six Month Smiles an even greater service and value to our patients.

The Six Month Smiles® System is a GP-focused system that equips dentists to help their adult patients with crooked teeth, using unique clear braces. The first step to becoming a Six Month Smiles Provider is to register for an upcoming Six Month Smiles Two Day Hands On Course.  You'll leave with the ability and confidence to start cases immediately!

"There is no 'silver bullet' to increased productivity, but Six Month Smiles comes the closest! Without a doubt, the single fastest way to grow your practice." -Bruce B. Baird, DDS, Productive Dentist Academy

Click here to read what others are saying about Six Month Smiles.

***Dr. Noel Ananthan will be a featured speaker at our upcoming Six Month Smiles Provider Conference! Providers on our forum will instantly recognize Dr. Ananthan's renown passion for orthodontics and helping his colleagues. He will be sharing his vast wealth of clinical knowledge on Six Month Smiles! Click to learn more and register for the conference.

Dr. Ananthan graduated from the University of Toronto's Faculty of Dentistry in 1986 where he gained early acceptance after one year of undergraduate study at the University of Western Ontario. He immediately opened his own private practice, which he has maintained for the past 26 years, focusing on comprehensive and aesthetic dentistry. Six Month Smiles has allowed him to re-integrate orthodontics, one of his passions since dental school, into his practice both as a standalone treatment and as a wonderful adjunct to his comprehensive cases.

He also maintains a management company which owns and operates dental practices for the express purpose of mentoring young dentists seeking to have their own practice.