You've probably heard about 6MS Invisible Aligners by now, but you're a dentist. Of course you want to know how well they work! Six Month Smiles is putting our aligners where our mouth is. Not only have we told you all the benefits of our clear aligners. We're also showing you.

Patient X heard about our aligners and a few of the patient-centered benefits — like the “memory foam” properties and 40% less initial force making the aligners more comfortable — and was sold. He really liked the aesthetics, such as scallop-shaped and near invisibility; and he understood the daily care regiment. Not only was he a candidate for aligner therapy, this case could easily be treated with 6MS Invisible Aligners and we were happy to oblige!

Treatment Plan and Chief Complaint: Patient was unhappy with the lower arch crowding and had issues keeping his teeth clean.  UL2 was excessively proclined and he wanted it tucked back. He also wanted better level and alignment of the upper arch. 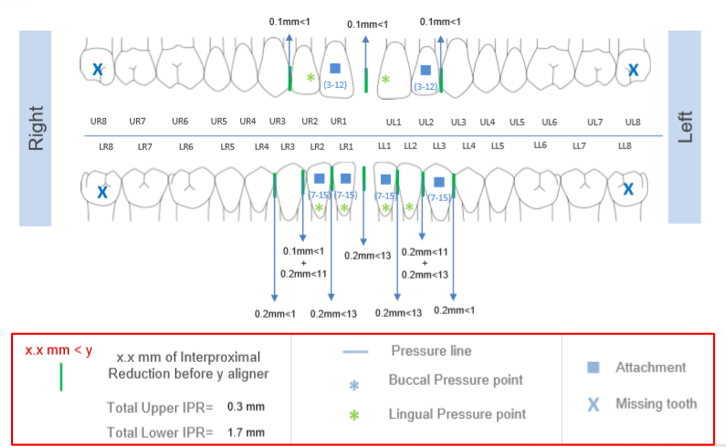 The feedback from Patient X was pretty positive! But, he did run into a little bout of non-compliance during the month of Ramadan, and found that wearing aligners while fasting was not pleasant (such is life!). Not a problem for Six Month Smiles though as 2 refinements are included with every case.

Mid-treatment progress: The upper arch rounded out nicely and the patient was happy. Root torque was used on the lower arch LL3. A small diastema opened up. This happened because there were minor errors in the initial impressions as interproximal edges between the upper central were not clear. This diastema closure was programmed into the one-set of additional aligners.

The Final Result: Total treatment time was 8 months (includes 1 month of non-compliance). The lower anteriors are de-rotated, LL3 has been up righted, which is typically a difficult movement with aligners, and UL2 is tucked back in. A permanent bonded retainer was placed on the lower arch and the patient will also wear 6MS Invisible Retainers on both the upper and lower arches for lifetime retention.

The patient was ecstatic with the outcome and so were we! Here’s to more smiles with aesthetically pleasing (and comfortable!) 6MS Invisible Aligners!