Six Months Smiles, Have You Been Reading My Diary?

I don’t actually have a diary for a number of reasons, the biggest one being that I’m not a 14-year-old girl. That said, the Notes app on my iPhone is filled with pages of things to bring up in therapy, potential lecture stories, and random dental thoughts. One of those random dental thoughts from a few years back reads “Note to self: start an ortho company that does Mixed Appliance cases.” I never got around to doing that, or the one below it that reads “Note to self: invent anti-curing light for a reversible cement so I won’t have to cut off another solid zirconia crown”. The good news is that the folks at Six Month Smiles created Mixed Appliance Therapy for all of us, so my procrastination is no longer to blame.

Six Month Smiles is the only short-term orthodontics company to offer this solution.

After graduating from dental school, I attended two comprehensive “ortho for gp’s” programs at the encouragement of a friend of mine who was an orthodontist. I treated primarily kids and adolescents with typical two-phase treatment, with a few adults mixed in as well. And while I enjoyed the procedure itself, the typical 24-month treatment plans were a challenge to my impatient personality. I didn’t like waiting two weeks to get veneers back, let alone two years to see results. I was phasing out the 24-month cases at the same time I heard about Six Month Smiles for the first time. This type of cosmetically-focused, short term orthodontics on adults was what I was looking for.

In 2000, aligners were introduced to the world through a $31 million TV campaign that had many patients coming in and asking about them. As I began to treat patients with aligners, it was frustrating how difficult it was to move teeth quickly and predictably when compared to brackets and archwires. As time went on, changes in the size, shape and number of composite attachments that were added to teeth, made them a more viable alternative option to fixed appliances, but you were still limited to what types of cases you could treat with them.

In my experience, lower anterior crowding is often the chief complaint that sparks the patient’s interest in short-term orthodontics. These patients will often have more than 4-5 mm of lower arch crowding, which is about the upper limit of crowding that an aligner case can handle well. Many of these cases have 2-3 mm of crowding in the upper arch, with some minor (5-10 degree) rotations, both of which can be handled well with aligners. 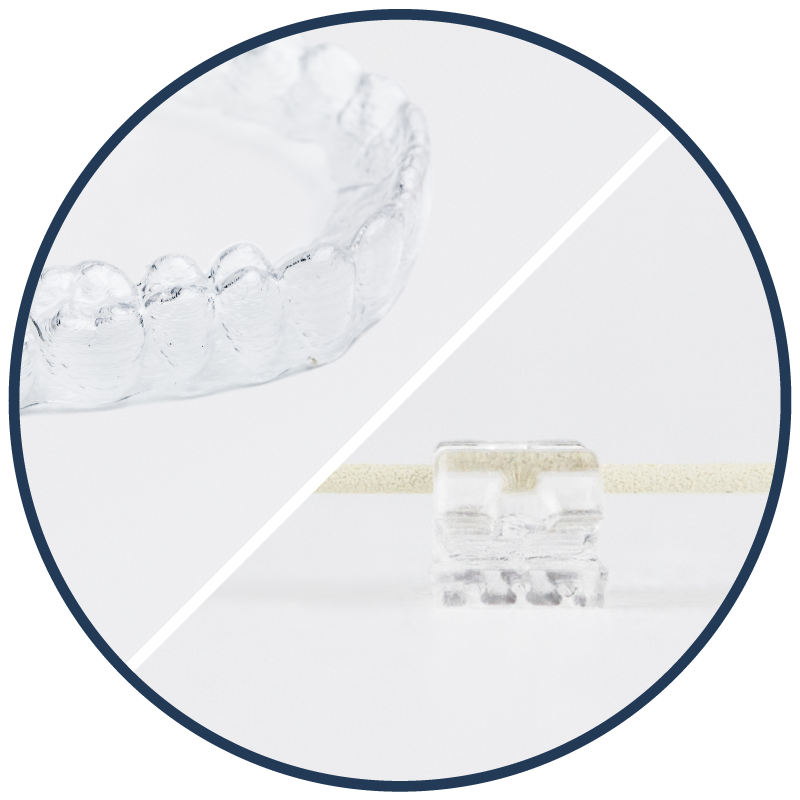 And that’s what led to the entry in my Notes app. Why wasn’t there a company that would allow me to do clear aligners on the upper arch and clear braces on the lower arch? Patients love wearing aligners on the upper arch because of increased comfort over fixed appliances, and they consider them to be invisible. On the lower arch where we might not be able to resolve their chief compliant, or resolve it in an acceptable period of time with aligners, we can typically resolve it with clear braces in 6 months. Patients never seem to complain about braces on the lower arch since they don’t show when smiling or in pictures.

"If your only tool is a hammer, everything looks like a nail"